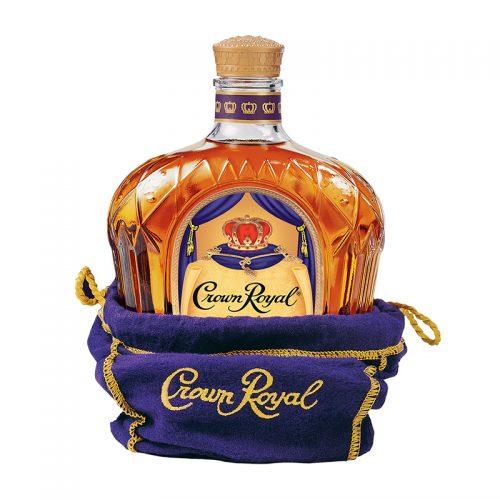 Crown Royal was created in 1939 to commemorate the Royal visit of King George VI and Queen Elizabeth to Canada. It was the first time the monarchy had set foot in Canada since it became an independent nation in 1867. After the phenomenal success of 5 Crown and 7 Crown, which had launched in 1934, Sam Bronfman had planned to launch a ‘super crown’ blend using a crown shaped bottle. Plans for this had stalled but the impending Royal visit provided the perfect opportunity to realise his vision. The pursuit of the perfect blend was a long one. Over 600 blends were tried and tested before arriving at the final one, which would became Seagram’s Crown Royal. Sam Bronfman’s presented the King and Queen with ten cases of the finalized and perfected blend, loaded onto the Royal train, which took them on their tour across the country. Crown Royal was originally conceived as a gift, and there was no intention of it ever being sold to consumers. The remaining 90 cases, of the original 100 cases produced, were kept in the vaults at Seagram House. They were given out as special gifts and due to the high demand they quickly ran out. It was decided to produce another batch and from this came the beginnings of the creation of Crown Royal as a commercial product.

Delicately smooth and creamy with hints of oak and the sweet flavor of vanilla.

You can find out more about which cookies we are using or switch them off in settings.

This website uses cookies so that we can provide you with the best user experience possible. Cookie information is stored in your browser and performs functions such as recognising you when you return to our website and helping our team to understand which sections of the website you find most interesting and useful.

Strictly Necessary Cookie should be enabled at all times so that we can save your preferences for cookie settings.

If you disable this cookie, we will not be able to save your preferences. This means that every time you visit this website you will need to enable or disable cookies again.

This website uses Google Analytics to collect anonymous information such as the number of visitors to the site, and the most popular pages.

Please enable Strictly Necessary Cookies first so that we can save your preferences!